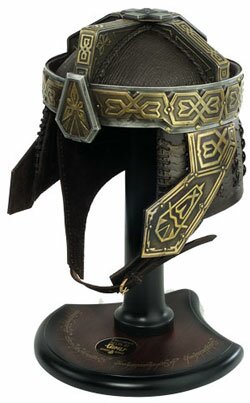 Helm Material: Iron, embossed brass decorations of dwarven designs, antiqued finish. Genuine leather lined interior with embossed designs and braided leather lining at the crown.The neck guard is made of hand-braided leather intricately woven around overlapping brass plate. Individually serialized on a solid brass plate mounted on the inside back of the helmet to insure authenticity. Display: 9-1/2" x 9-3/4" x 6-7/8" wood with burned-edge finish. "The One Ring" inscription in gold silk screen. Brass medallion.

Officially Licensed Adult Collectible Reproduction With over 100 million copies sold in over 40 languages, millions have grown up with "The Lord of the Rings," the classic epic tale considered by millions to be the greatest fantasy-adventure story ever told. J.R.R. Tolkien's phenomenal epic trilogy chronicles the struggle between good and evil for possession of a magical ring. The book trilogy, named the most popular book of the 20th Century, is the motion picture event of the 21st Century. "The Lord of the Rings" is presented in a trilogy of feature films from New Line Cinema, "The Fellowship of the Ring," "The Two Towers," and "The Return of the King," the last to be released in December 2003. A work of sheer invention on a staggering scale, "The Lord of the Rings" takes us back to Middle-earth, an era that predates written history, where humans share the world with immortal elves, powerful wizards, and industrious dwarves.

Dwarves of Middle-earth are short, but tough, with a strong but ancient sense of justice and an abiding love of all things beautiful. Typically, dwarves live for 250 years and are known primarily for their innate abilities to smith metal and stone. Gimli", a proud and strong-willed Dwarf, is a mighty warrior, quick to draw his axes in battle. He is the son of Gloin, and accompanied his father to the Council of Elrond at Rivendell, where he was chosen to represent the Dwarves in the Fellowship of the Ring. After the Fellowship became separated, Gimli" fought valiantly alongside Legolas and Aragorn in the Battle of Helms Deep. With his unshakable determination for success, he proves a valuable aid to the Fellowship. The helmet design incorporates a series of geometric shapes to suggest the precision and solidity of the Dwarven armor.