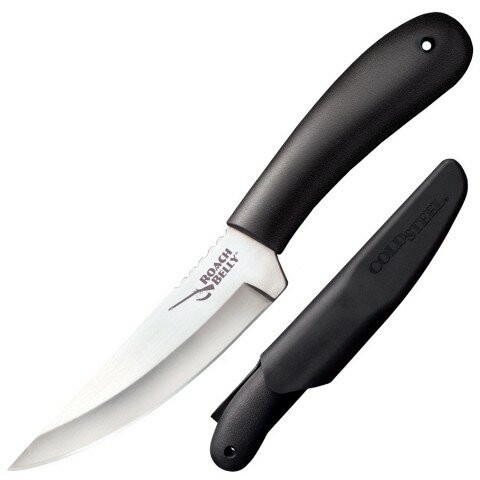 The historical Roach Belly knife was a short blade with a pronounced upswept curve and a sharp point. It was most likely named after the common Roach Fish, which had a similarly round curving belly. It was known in 17th century Britain and quite common in the American Colonies because it was inexpensive and versatile.

Cold Steel’s interpretation of this knife is a nod to the Black Powder Community, which has continued to appreciate the Roach Belly’s economy, versatility and effectiveness. Our version retains the profile of the original but incorporates the latest in modern materials for its construction. The hollow ground blade is made of 4116 Krupp Stainless, expertly heat treated to Rc 56-57, and given a fine sharp edge that’s easy to maintain.

Instead of the traditional wood handle, ours is made of tough Polypropylene, so it’s impervious to the elements and won’t swell, shrink, rot or crack the way wood does.

The Roach Belly comes with a black Secure-Ex sheath.