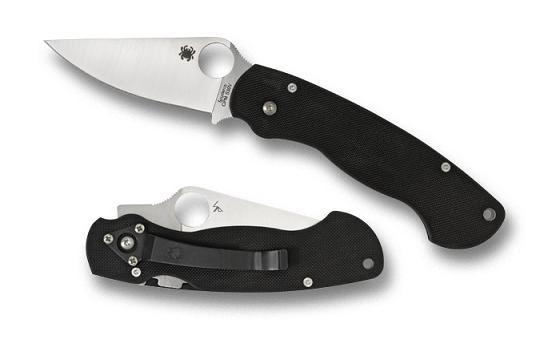 The most awaited mid-sized survival knife of 2004. When Spyderco initially introduced our Military Model critics claimed it too large and more knife than the average user needed. Likewise, fans enthusiastically heralded the knife's big performance attributes. We arrive at the question knife manufacturers often ask themselves, "How do we satisfy both worlds and create a mid-sized knife that acts, cuts and performs like a larger knife?" Our answer was the Para Military.
The PM is two-thirds the size of the original Military Model. Its flat-ground CPM-S30V blade stretches 3-3/32" long with the Spyderco Round Hole generously sized at 14mm for gloved or large hands. Furrowing above the hole presents a positioning spot for the thumb that's texture, keeping slipping to a minimum. Nested into the G-10 scale is a top-seated Heavy duty rated Compression Lock. By inlaying (nesting) the lock we increase its strength without adding thick and bulky liners. The handle expands at the front and back for advanced grip retention, eliminating forward or backward sliding. All steel and curved to keep it pinned in a pocket, the clip attaches for right-hande tip-down carry. The ultimate mid-sized survival knife.