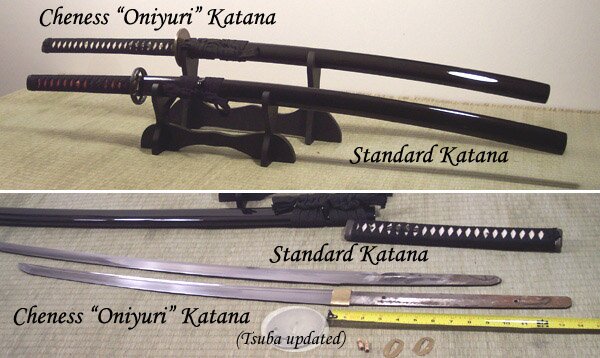 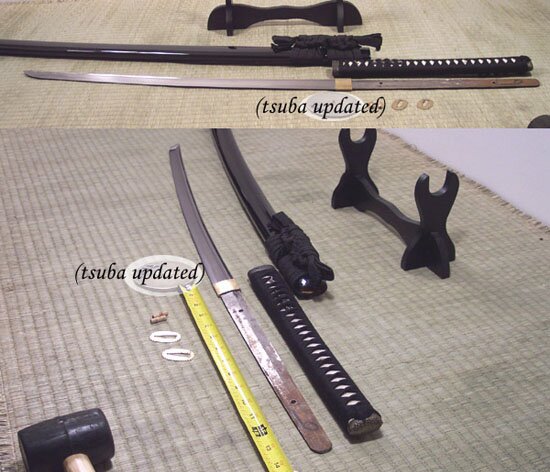 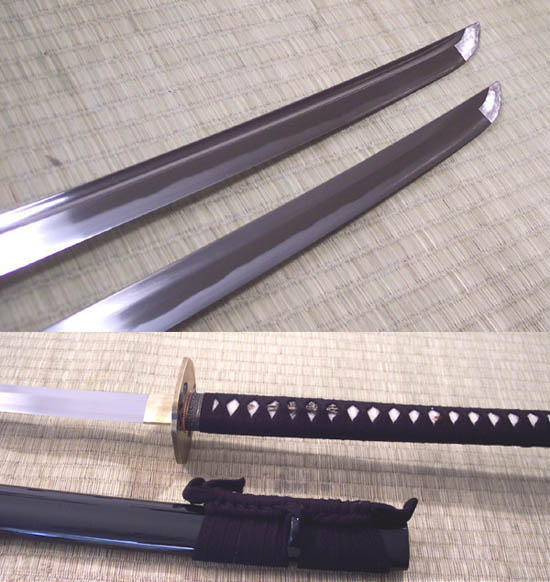 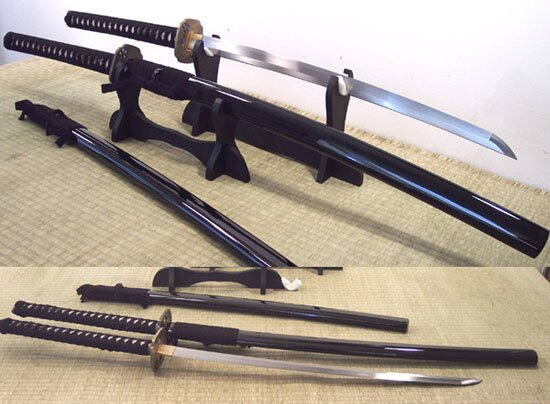 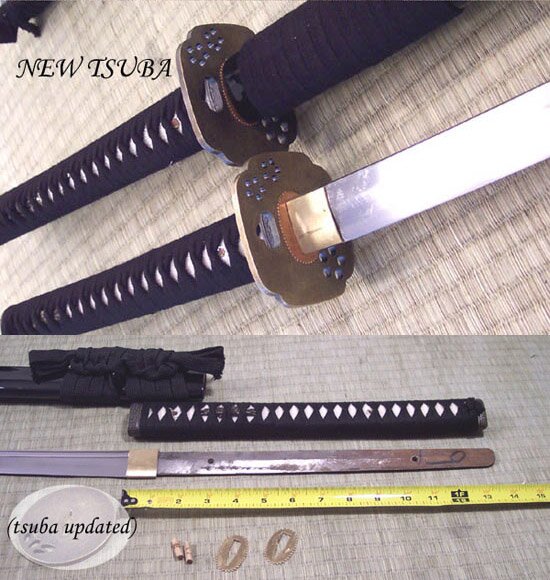 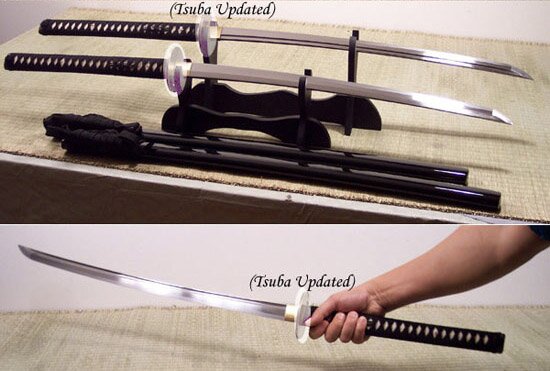 The "Oniyuri" (Tiger Lily) katana is a custom made 9260 spring steel blade specialized for practice by specific ryu-ha of the Bujinkan Federation. The blade body is a 9260 silicon alloy carbon spring steel. Blade is a unique 23" and handle is an even rarer 14" in length. It is a shinobi (ninja) sword with the apparence of a katana. The forms of this blade follows the functions that it serves.

(The no-fuller version blade has a more forward center of gravity heavier weight. This type of blades have more lateral strength and are easier for tameshigiri from the weight and the reduced drag. Whereas the varient with fuller is better for kata practice, the no-fuller varient is better for cutting practices.)

The Oniyuri is a very specialized and very unique sword only available through us and no where else. Originally, it was custom made for a few specific dojo customers of the Bujinkan Federation. It is similar to, but differs in many area to our Onibasu. We have since decided to make this specialized katana available to the general public without the need to custom order one through a dojo.

The Oniyuri is made of the extremely resilient 9260 Spring Steel to withstand various exercises within the dojo setting.

What really makes this sword unique is its specific dimensions of various components. The blade is a shorter 23" in length to allow for faster maneuvering... However, it is housed in a regular length saya of 30". On the outside, it gives a deceptive impression that it is a regular katana... but when drawn, it clears the scabbard faster and earlier than the opponent expects due to the shorter blade length. Due to its relatively lighter blade weight, plus the extensive counter weight provided by the tsuka, it handles very fast with extensive leverage of the longer tsuka.

The 14" tsuka (13" not counting fuchi/kashira) with an extensive nakago is used for restraining techniques in some specific ryu-ha of Bujinkan. The extensive nakago (tang) within the long handle also makes the grip portion into a reasonably feasible section for blocking.

This is essentially a shinobi (ninja) katana... disguised to have the same appearance as a standard katana (as true ninja swords tends to be -- since it is never in anyones practice to go out of their way to reveal their own identify). (The straight bladed ninja sword is more of a Hollywood rendition of the shinobi katana).

Both versions of the blade (fuller and non-fuller) are fully sharpened with primary-only bevel for cutting exercises.

Please note that on a couple of the photos shown above, the tsuba differs in that it appear round (This is the old styled Oniyuri now discontinued)... The new Oniyuri uses the more square mokko shaped Kanbai brass tsuba, which is more consistent with the specs provided for by Bujinkan.

Though the Oniyuri is a shorter blade at the cutting end, there is actually as much material involved as a standard katana. The extensive nakago (tang) is a full 13.5" and fills the handle. This massive nakago both acts as a counterweight as well as allow to blade to be leveraged at the handle, with strength to block strikes.

When you consider the full length of this blade, it is actually not much shorter than the standard katana.

The Oniyuri is actually a longer blade overall than the standard katana. (44.5" vs. 41.5" in saya). (Excuse the photo where I failed to show this due to bad angle of the camera). As a result, this sword cannot be shipped to certain countries with 42" as the max length limit. (Please check USPS website for max length restriction of shipping to your particular country).