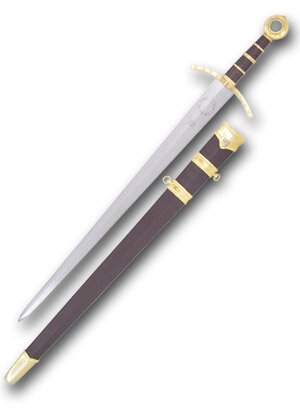 Edward III of England was a warrior who is remembered in history for his dramatic victory against the French at Crecy (1346) and his sword, far from being a purely ceremonial piece, was made to be wielded in battle. The Edward III Sword (SH2033) has survived the centuries in remarkably good condition and we have been able to replicate it in great detail. The style is typical of a 14th century battle sword but the fittings are undoubtedly those of a king, from the heavy gilding to the adder-skin grip to the beautifully enameled coat of arms, the latter illustrating Edward`s claim to French territories by combining the Lion of England with the Fleur-de-Lys of France. This well balanced sword may be wielded single-handed or hand-and-a-half style and would (and perhaps did!) give an excellent accounting of itself in the field of battle.

Authentic detailing
Fully functional
A sword fit for a king!