Welcome to our new website look. The old version of the store is still available at: military.swords24.eu
Category: » Swords, daggers, axes » European swords. 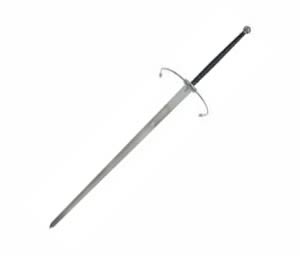 Wielded with untamed ferocity on many a Gaelic battlefield, the massive Lowlander sword vividly illustrates the might of the Scots of old. Known as Slaughter-Swords in the 16th century, these were the swords of choice for Scottish mercenaries of the period, and at close to six feet long the Lowlander (SH2065) faithfully replicates a surviving museum piece. Though by far the largest sword ever offered by CAS/Hanwei, the Lowlander is beautifully proportioned and balanced. The typically Scottish quatrefoils in the ring guards attest to the heritage of this imposing piece. A wall mount is provided to allow the transplanted Gael to display his sword with pride.

Down Under Knife The Outback Eclipse - DUKOBE