Welcome to our new website look. The old version of the store is still available at: military.swords24.eu
Category: » Collections » Lord of The Rings - other 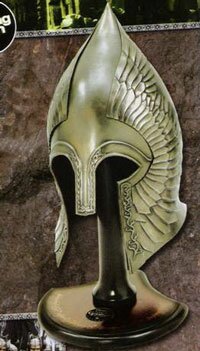 This authentically detailed helmet is a reproduction of the helmet prominently featured in The Lord of the Rings, The Return of the King presented by New Line Cinema. United Cutlery Brands, industry leader in fine movie reproductions, has meticulously recreated the actual prop helmet using the finest grade materials and craftsmanship of the highest quality available. This intricately detailed actor's scale helmet is wearable, and is completely handcrafted in solid iron with embossed decoration and a hand-antiqued finish. It features a genuine leather-lined interior with an individually serialized solid brass plate mounted on the inside back of the helmet to ensure authenticity. This adult collectible is strictly limited to 2000 pieces worldwide and each helmet is presented with a wood display stand adorned with The One Ring inscription and a brass medallion.

Under the command of Gandalf the White the men of Gondor defended Minas Tirith, the Kingdom of Gondor, from within the city walls against the siege of Sauron. Greatly outnumbered by Sauron's armies, the Gondorian infantry did not stand a chance in open war. Miraculously, with the use of their trebuchets and archers, the Gondorian army held their own until the nine Nazgûl, upon their fell beasts, swooped in destroying the trebuchets and forcing men to flee their posts. This distraction allowed the trolls to push their siege towers in, unleashing scores of orcs onto the walls of the city, and allowing the release of Mordor's greatest weapon Grond, a 150 foot iron battering ram shaped like a wolf. The gates of the city would not hold, driving the Gondorians back into the third level of the city.

With much of the lower levels of Gondor in flames, it seemed as if it was on the verge of a catastrophic defeat, until suddenly the Riders of the Rohirrim appeared on the horizon, closing in and driving the armies of Mordor away from the city, thus ending the siege upon Gondor and entering into the Battle of the Pelennor fields. Although the Gondorians were technologically advanced compared to most races of Middle-earth, the design of the helm carries details reminiscent of Numenor. The barbut style helm one piece, shoulder-length, and open-faced finished off the suit of steel plate armor that a Gondorian infantryman wore. The smooth finish and flared bottom of the helm offered better neck protection, allowing blows to be deflected away from the body. Adorned on the sides of the helm are seabird wings,a familiar Gondorian motif.